Baldy Brings the Calf Count to 11!

Sometimes, the right whale calves seen in the Southeast US (aka SEUS, the only known calving ground) account for all the calves born that year- what you see down there is what the population gets! And sometimes, that number is added to well after the whales have migrated northward- maybe because observers weren't out surveying when those moms and calves were in the area, or those whales were outside of typical habitat or survey zones. Whatever the reason, a post-season increase is fine by us, and that's why we were excited to get word of a sighting of a new mom and calf pair for the year! This sighting brings the 2014 calf count from 10 up to 11! 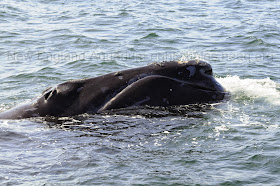 The mom is Catalog #1240, named "Baldy" for her sparse callosity which makes her look bald in comparison to other right whales. The first sighting of her with this new calf was made during an aerial survey over the Great South Channel, an area east of Cape Cod. 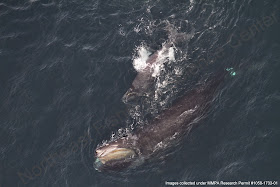 On board the flight was Allison Henry, a Fishery Biologist with NMFS' Northeast Fisheries Science Center (NEFSC), who has been an aerial observer since 2003! Allison shares her description of this day over the water with us:


"After a lack of right whale sightings in the Great South Channel for the last few years, May 8, 2014 seemed to be the day the whales came “back”! The weather conditions were perfect and there were so many whales we had to land, refuel, and head back out to make sure we photographed as many as we could while it was still light out. Despite that we still ran out of light and time!

It doesn’t get much better than flying in late afternoon light over flat calm waters with 60+ right whales skim feeding everywhere you look. Unless you add in two mother and calf pairs… and notice that one of them is not one you recognize from the list of known mothers for the year! Luckily, Baldy has such a distinctive callosity pattern, we had a strong hunch it was her before we even landed and sent the photos to the New England Aquarium for confirmation. This is not the first time the NEFSC survey team has seen a mom of the year that was not seen in the SEUS. Though it doesn’t happen often, it’s an extra little thrill to know that our effort has helped add one more whale to a slowly growing list. That’s why all the aerial survey teams fly, and for all the sad and frustrating things we see, such as entanglements or carcasses, these sightings of new calves are a huge boost to morale.

Oh, and another cherry on our whale sundae was seeing the bowhead whale [previously sighted in Cape Cod Bay] skim feeding just a few miles from Baldy and her calf. Certainly one of the best flights we’ve had in a long time!" 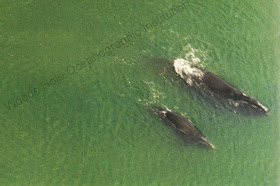 April 12, 1974. A photo from the first sighting ever of Baldy, with her calf! Photo: Bill Watkins, Woods Hole Oceanographic Institution.


Baldy is one of the older Cataloged whales, which automatically makes her really cool in my book. She was first sighted on April 12,1974- that's just over 40 years ago!! The photo above is from that first sighting. Since the mean age of a female's first calving is 10 years and she had a calf in 1974, she could be 50 years old at the very least (we have no record of her prior to 1974, so we don't know how old she actually is). She is also a great-grandmother, and this 2014 calf is her 9th known calf! 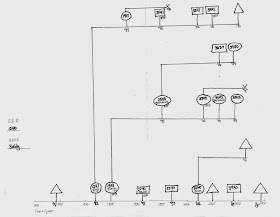 She often travels to the Bay of Fundy in the summer, so we're hoping that our upcoming field season allows us a sighting of this amazing, important member of the population with her newest offspring in tow!